Paying rent is one of the main causes of poverty amongst older Australians.

The Fix Pension Poverty campaign is calling on the Government to increase Rent Assistance by at least 30% for couples and 50% for singles, and to index the payment to rental costs.

Historically, high levels of home-ownership and the Age Pension have been regarded as the twin pillars supporting a reasonable standard of living for people as they get older. More recently, superannuation has been introduced.

Over time Government inaction has allowed these pillars to crumble, particularly as home-ownership levels are dropping.

Our research shows that those on the Age Pension who are renting face significantly higher housing costs than those who own their own home.

Commonwealth Rent Assistance (CRA) is now much less effective at addressing poverty than it once was. People who rent face significantly higher housing costs than those who own their own home, and CRA does not address this gap.

CRA rates of payment simply haven’t kept up with runaway rental increases and linking the allowance to the Consumer Price Index is not sufficient to prevent an increasing number of older Australians sliding further beneath the poverty line. The disadvantage this imposes falls particularly hard on single people living on the pension and disproportionately affects women. 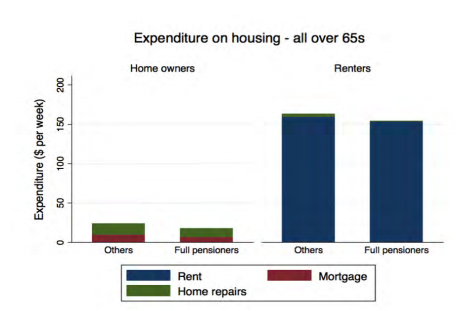